We’ve been asked questions around this topic as of late… The markets seem to have had a nice recovery after the collapse in Q1, but it doesn’t quite seem to match the state of our economy and/or the status of Covid-19 cases. Is this rise more a function of emotion and sentiment or a true representation of economic health?

This is a great question. There is a financial aspect to stock valuations (whether stock traders buy/sell/hold), but the percentage attributable to that versus the momentum or emotional aspect to the market's rise is hard to define. And most important – the market forces between these two variables change all the time. So, it does seem to appear the portion linked to momentum/emotional factors seems to overweight financial justification at this moment (or at least through the end of August prior to the sudden stock price decreases the last week or so – especially in tech stocks).

We don't think this is necessarily bad or good. It is what it is. Our firm’s approach is to focus on the financial justification of market movements. We emphasize the importance of being prudent (broad market diversification) and a long term investor (avoid potential pitfalls of making emotional short term mistakes picking stocks and timing the markets). 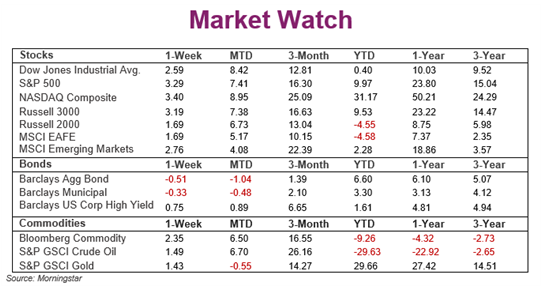 Look at the Market Watch data (as of Friday, August 28). The broader view tells us:

The markets are cyclical – as individual stocks and baskets of stocks - i.e. indexes. But the market uptick, through August, seems to be based on a “me too” attitude by investors, especially in tech stocks. It is a bit reminiscent of the late 1990's when everyone thought they could make money buying "dot-com" stocks. Do you remember what happened after that?

We are not suggesting the market is going to crash. But we do know the U.S. market has been hot for a very long time, since 2008, except for Q1 2020 as a result of Covid-19. And we know (as noted above), that small U.S. stocks, developed international stocks and emerging market stocks have trailed the U.S. the last 3 years. The cycle will likely change at some point. It's the financial justification of stock prices (the market valuation) that tells us so. 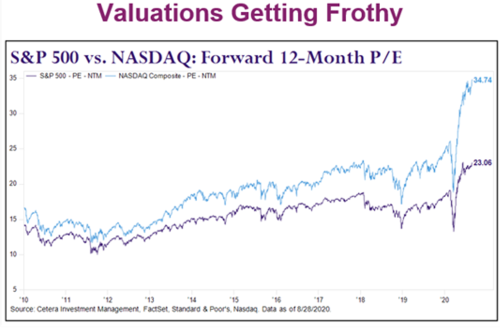 See the Valuations Getting Frothy chart (as of Friday, August 28). This tells the story, but only comparing the S&P 500 and NASDAQ. The other indexes mentioned above have even lower PE ratios. Both the S&P 500 and Nasdaq have fully recovered their bear market losses and have reached new all-time highs. While momentum for both indexes has been strong since March, valuations have reached frothy levels, especially for the tech-heavy NASDAQ. The forward P/E ratio, as shown in the chart, has climbed well above its pre-pandemic peak (early 2020). Valuations don't always impact markets in the near-term, but they can impact returns over the long-term when at unusually high levels.